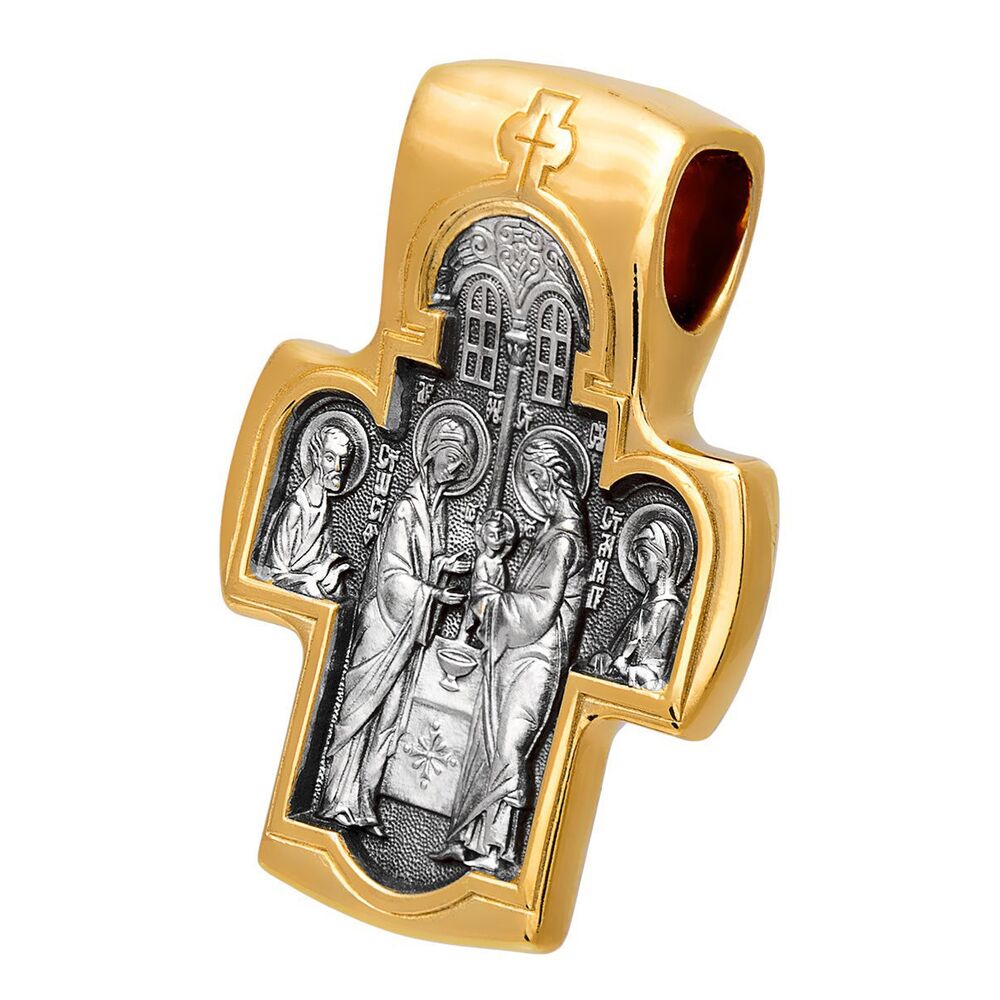 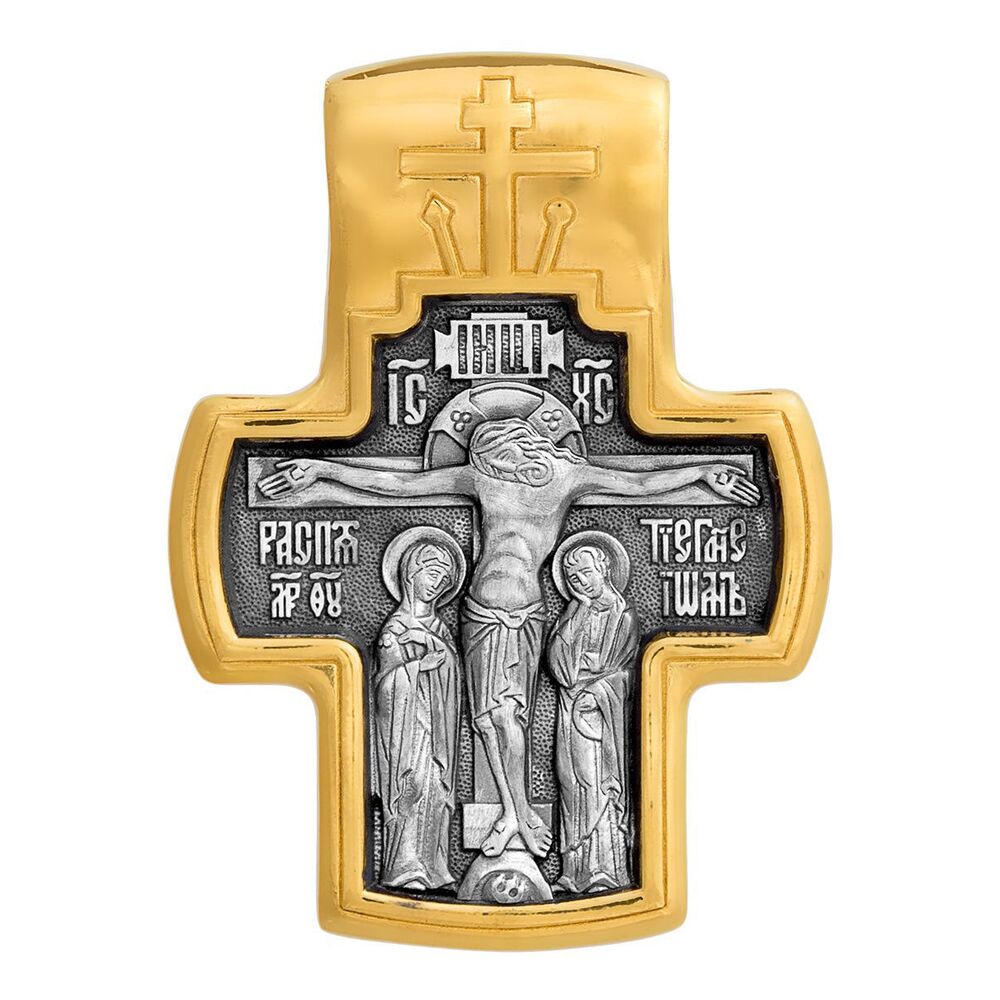 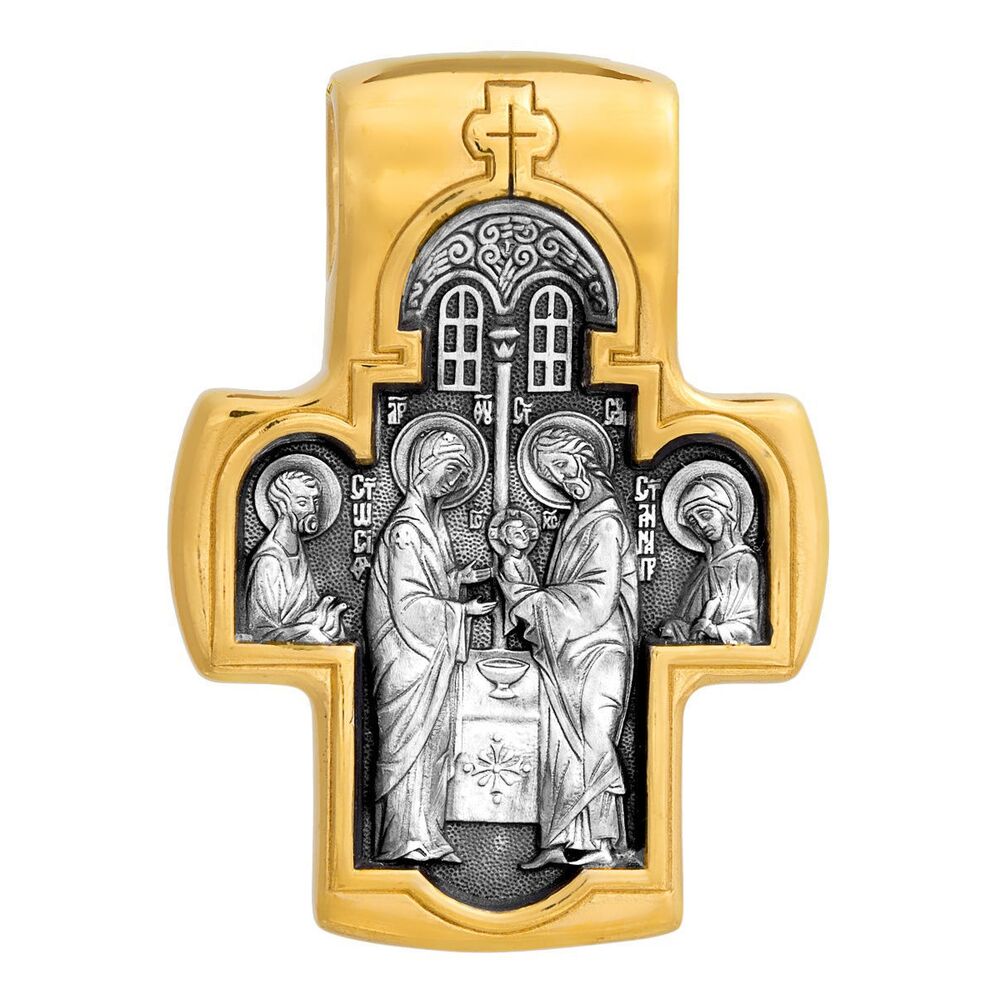 "The cross with images of crucifix on the obverse and Meeting of the Lord on the reverse is made in tradition of ancient festive crosses. On the obverse crucified Christ is portrayed interceded with the Most Holy Mother of God and St. John the Theologian, Apostle and Evangelist. Until last minutes they did not leave Christ during His suffering on the cross. Jesus Christ bent His head to His favorite disciple as if telling: “Here is your Mother!” entrusting the Mother of God to his care.

Over the Lord’s head on the transverse crossbar four letters are written: «ИНЦИ» (“INRJ”). This is the picture of the tablet that was nailed to the Christ cross by Pontius Pilate order. The letters mean “Jesus Nazarene Rex Judaic”. The holy names of Christ, of the Mother of God, and of Apostle John are abbreviated near them as well: according to the Church doctrine, the icon without inscription loses its miracle-working strength. The represented event is as well named – “Crucifixion of the Lord” is written under His stretched arms.

On the cross reverse there is an icon of the most esteemed one of Twelve Great Feasts – “Meeting of the Lord” that depicts the encounter of Infant Christ (brought to the temple by His Mother and St. Joseph) with the righteous elder Simeon. The holy person was promised by God that he won1t die until seeing born Messiah.

While translating the Book of Isaiah, he stopped at a prophecy well-known to him: “Behold, a Virgin shall conceive and bear a Son…” (Isaiah 7:14). Simeon had doubts about the word “Virgin,” and after pondering for a while, decided to replace it with the words “young woman,” as being more understandable and believable. But suddenly an angel appeared before him and, staying his hand, said: “Believe in what is written, for you won’t die until you see its fulfillment with the Lord Christ born of a Virgin with your own eyes”.

Simeon was three hundred sixty years of age when the Holy Spirit took him to the temple for him to see the Infant Christ whom the Most Holy Mother of God brought there.

According to Moses law a woman who had given birth to a male baby, was prohibited entering the Lord’s temple during forty days. After that the mother brought the baby to the temple in order to make a thanksgiving and purificatory offering to God. But the Most Holy Mother of God was needless of purification, since She gave birth to the Source of purity and sanctity from the Holy Spirit. But by Her deep humility She obeyed the law.  St. Joseph holding two pigeons – a sacrifice to the temple – in his hands.

Piously he bowed down to the Infant and His Mother, and taking the Infant God up in his arms, he gave thanks to God, and spoke the words repeated by the Church each evening at Vespers: ""Lord, now lettest Thou Thy servant depart in peace, according to Thy word, for mine eyes have seen Thy salvation, which Thou hast prepared before the face of all people, a light to enlighten the Gentiles, and the glory of Thy people Israel"" (Luke 2:29-32). St Simeon then blessed St. Joseph and the Most Holy Virgin, and told her that very prophecy: ""Behold, this child is set for the fall and rising again of many in Israel, and for a sign which shall be spoken against. Yea, a sword shall pierce through your own soul also, that the thoughts of many hearts may be revealed"" (Luke 2:34-35).

He, who said the words ""Lord, now lettest Thou...”, was granted God's grace of liberating those who are incarcerated. St Simeon is prayed for convicts.

The Righteous Simeon, the God-receiver foretold that the Most Holy Mother of God would suffer, and said: ""Behold, this child is set for the fall and rising again of many in Israel, and for a sign which shall be spoken against. Yea, a sword shall pierce through your own soul also, that the thoughts of many hearts may be revealed"" (Luke 2:34-35).

Also present in the Temple at that time was a prophetess righteous Anna. On seeing Jesus in the Temple, she joined her voice to that of Simeon, thanking God and prophesying about the Infant as of the Messiah.

Candlemas dates back to the most ancient feasts of Christian Church. In 528 under the Emperor Justinian (527-565) there was a terrible plague in the Byzantine Empire, so that many thousands died every day, and the bodies of the dead lay for a long time without being buried, while in the city of Antioch another natural disaster was added – a severe earthquake. Many buildings were destroyed, burying in their ruins those who had survived the plague. At that time a certain pious person received a revelation from above that people should begin celebrating the day of the Meeting of the Lord, as well as other feasts of the Lord and the Mother of God. Thus, on the eve of the 40th day after the Nativity of Christ, i.e. the day of the Meeting of our Lord, when the all-night vigil was served, followed by a procession with the cross, – the plague and the earthquake immediately stopped. Being grateful to God in 544 Church instituted Candlemas as one of Twelve Great Feasts. Since then it has been solemnized on February 15 (2)."