Neck Cross Akimov 101.066 «The Lord Almighty. The Prophet Elijah in the Wilderness» 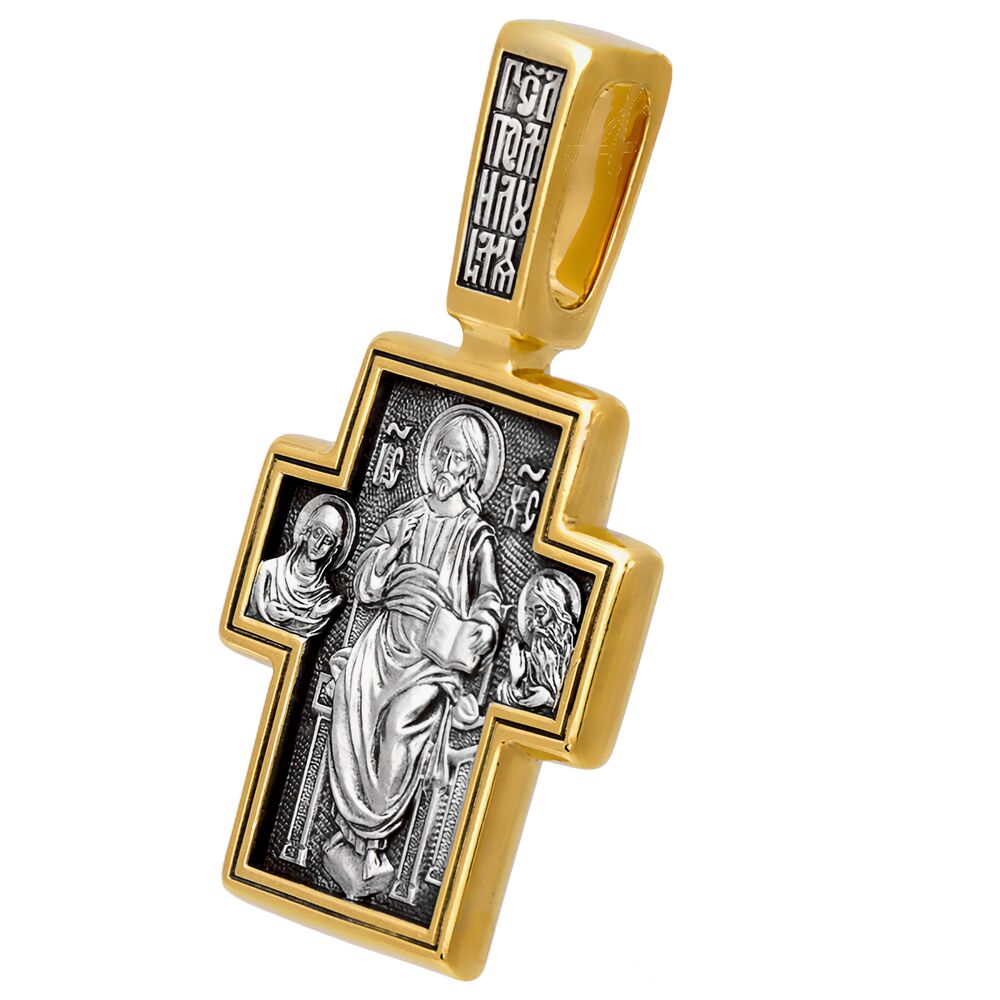 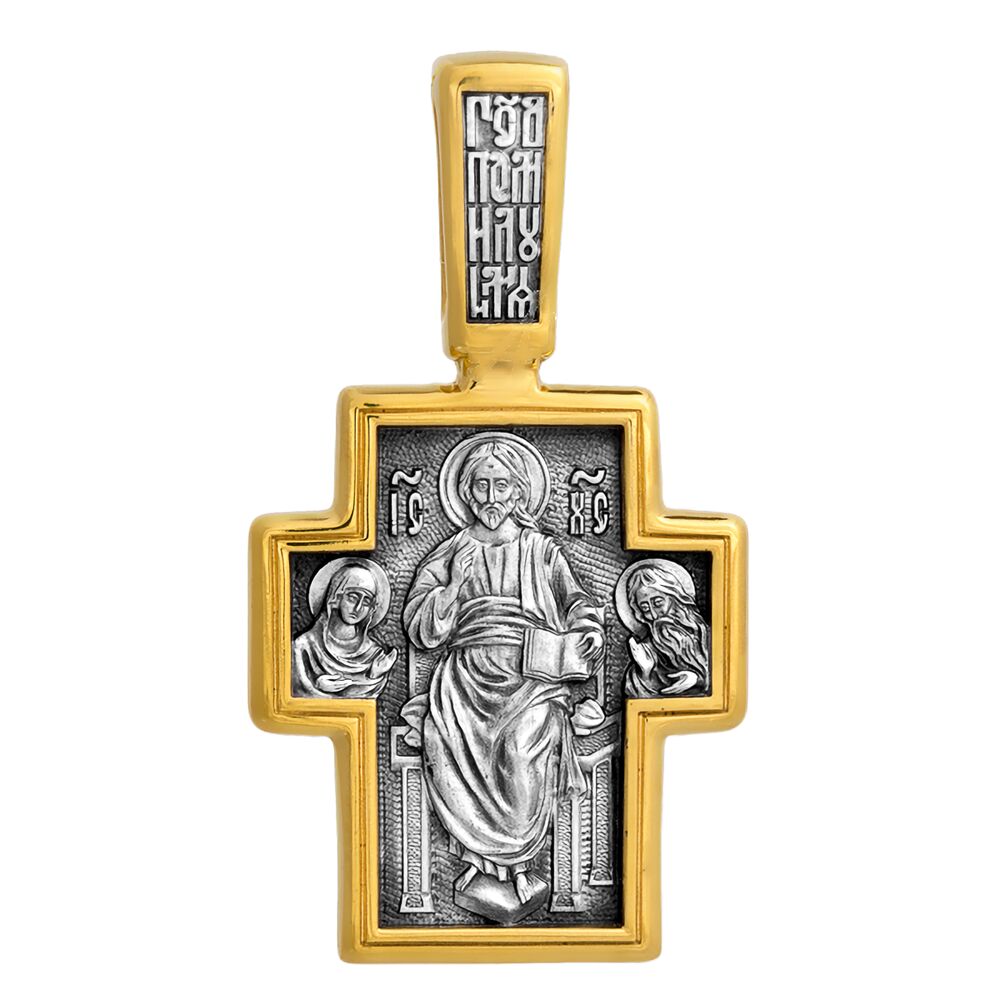 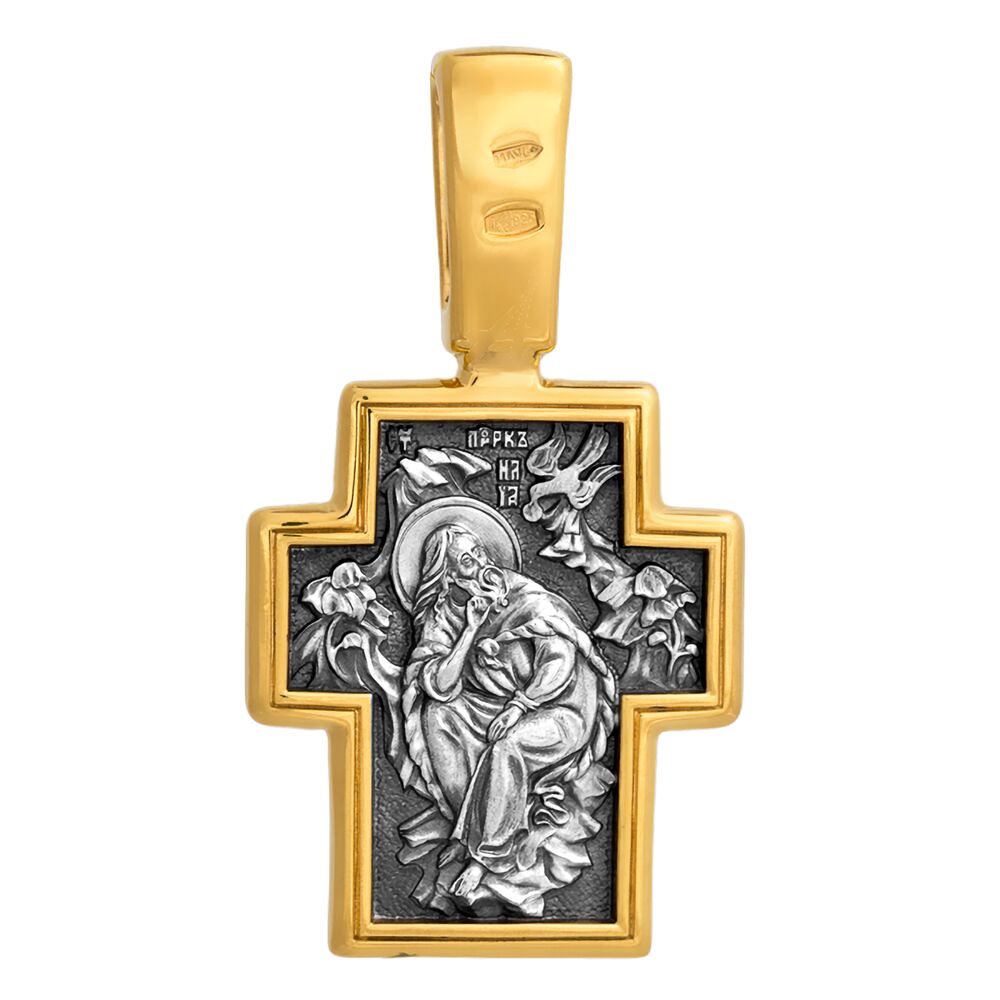 "On the obverse of this small compact cross we see images of the Lord Almighty and the Most Holy Mother of God and John the Forerunner interceding with; on its reverse there is the icon of the Prophet Elijah in the Wilderness. The cross is made in Russian iconographic traditions. The composition with of prayerful intercession pose on its reverse is called “Deesis”. The Deisis tier continued with images of Archangels, Holy Hierarchs, saints, and martyrs in principal in the Orthodox iconostasis. It shows the perfect Church of the saints praying to God for people on earth. Above the image of “Deesis” the prayer is written: “O Lord, have mercy on me”.

The icon of the Lord Almighty is the central image of “Deesis”; we see Him as the master of human destinies, the ruler and the judge of the entire Universe. A book in His hands symbolizes the Book of Life, wherein the human deeds and the names of righteous persons are written. The Lord knows that not everybody around will enter the Kingdom of Heaven. But the Merciful Lord has no pleasure in the death of the wicked, and till the last gives us a chance to change our destiny, to overcome our sins, and to take the righteous way. And He inflicts ordeals on people thereto. At times it may be dangerous apparitions that return the entire nations to the straight and narrow. Thus, it is told in the Old Testament that God struck the Israelis with starvation. That happened in the time of the Prophet Elijah whose image is placed on the cross reverse.

The Prophet Elijah is one of the greatest prophets and the first virgin of Old Testament. He descended from the tribe of Levyah and was born in the city of Tishba in Galahad 900 years prior to Christ birth. When Elijah was born his father Shovak had a vision: sightly men spoke to the baby, swaddled it in fire and nourished on flame. He spent his whole youth in prayer, fast, and meditation, withdrawing often to the desert for contemplating and praying in tranquility. He was call upon to prophetic ministering in the reign of idolatrous King Achab who worshipped Baal and made the Israelites do the same. Idolatry resulted in complete moral degradation of the Israelites. The Lord sent Elijah to King Achab and ordered to foretell that famine will befall his kingdom if he and his people do not turn their souls to true God. Achab disobeyed the Prophet, and the land was overtaken by drought and starvation. At the time of starvation Elijah spent a year in desert and craws brought food for him thereto. Afterwards he lived in the house of a widow in Zarephath more than two years.

Poor widow and her children were hard hit by starvation, living in expectation of decease. At the Prophet desire she cooked unleavened bread of the last flour handful and of butter leftover. Since then by Elijah prayer she had ran out of neither flour, nor butter during the whole of starvation. By the force of his prayer the great Prophet made another wonder – resurrected the deceased son of the widow.

Three and a half years later Elijah returned to Israeli kingdom and told the king and the people that all Israelite miseries origin from the fact that they forgot true God and again bowed to Baal idol. For Israelite mistake to be proved, Elijah suggested that two altars be made – one to Baal and the other to God. “Let us make sacrifices, and if the fire come from the sky to Baal altar, then he is the true God, and if not – he is an idol” (I Kings 18, 21-24). The fire fall down and scorched the altar by Elijah. First Baal altar was made, heap up firewood, slaughtered a calf. Baal priests started to pray their idol, but their god remained silent, and not a sparkle came down from above.  In the evening Elijah made the altar of his own, laid firewood down, watered it and started to pray to God. And all of a sudden fire fell down from heaven and ignited not only firewood, but the water and even the altar stones. When the people saw the wonder, everyone glorified true God, and came to believe in Him again. Then by the Prophet prayer the heavens opened; and heavy rain fell, and satiated thirsty ground.

For his being flaming zealous toward Divine Glory the Prophet Elijah was taken to the Heavens alive in fiery chariot. This wonderful rapture to heaven was eye-witnessed by the Prophet Elisha who was covered by the fallen mantle of Elijah, and was bestowed twice as much theomancy as the Prophet Elijah. According to Holy Church legend Prophet Elijah will be the Precursor of the Second Advent and will meet his corporeal death through Antichrist.