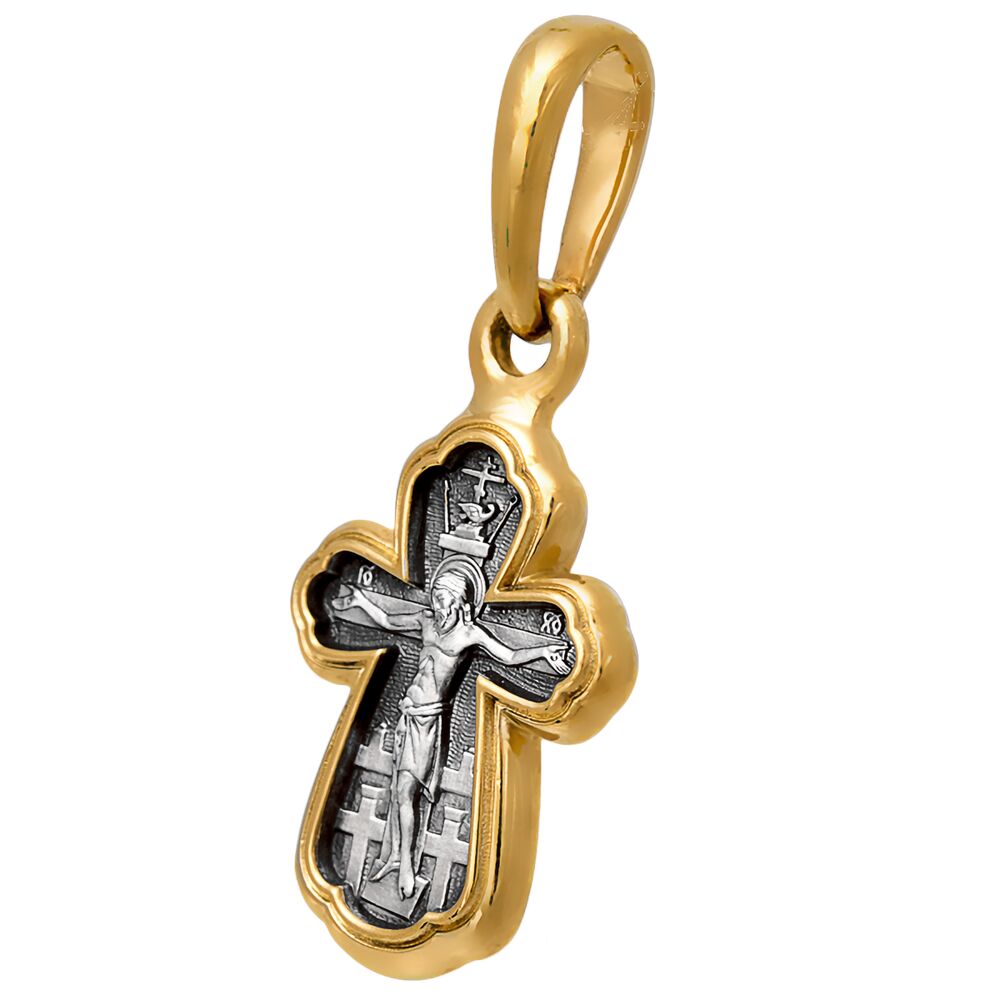 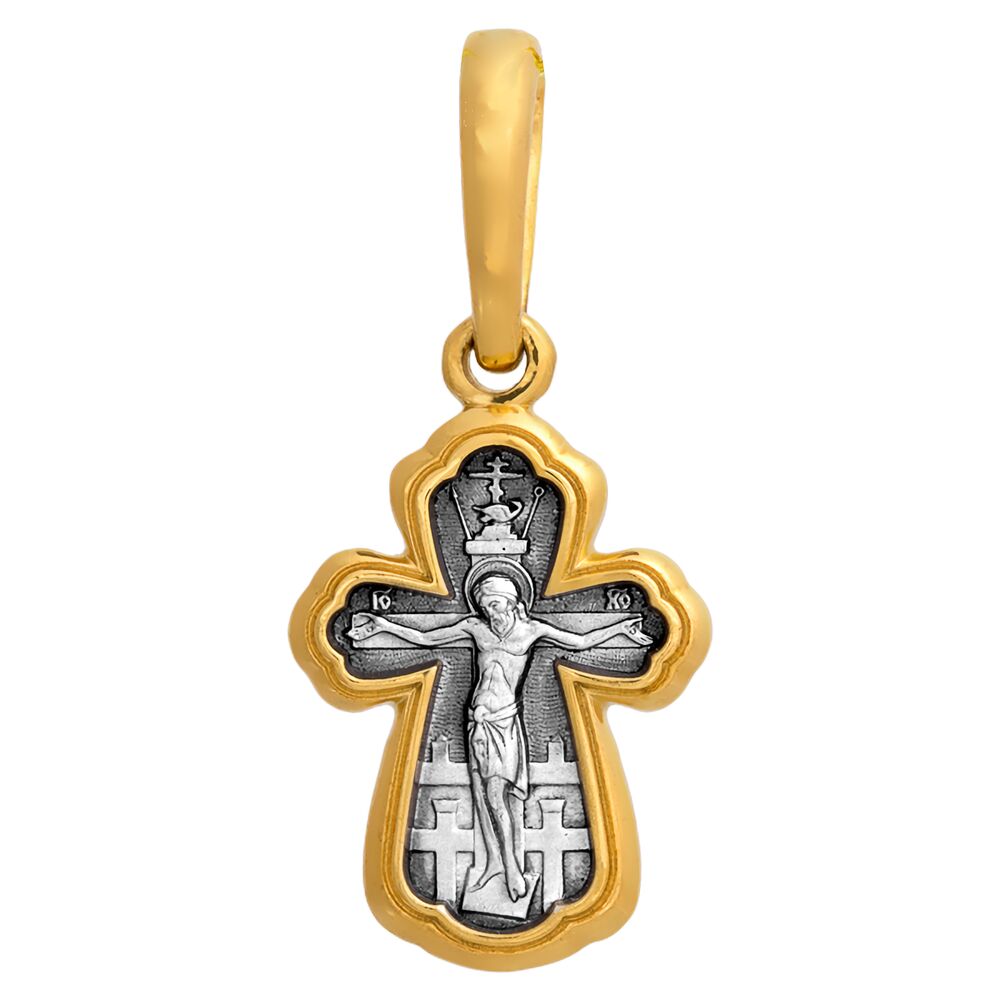 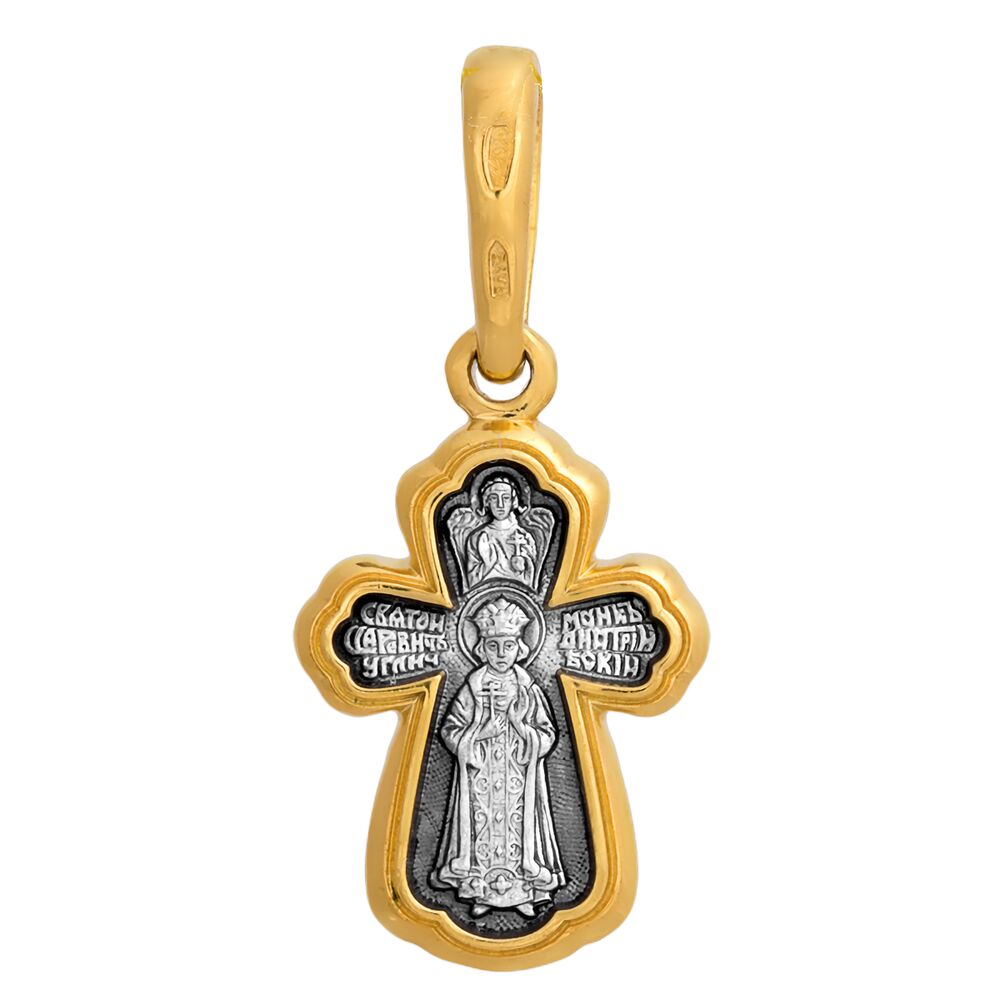 "It is a small cross with a crucifix on its obverse, and St. Demetrius Tsarevich of Uflich and Guardian Angel on the reverse. The cross shape and substance turn us towards the history of Russia of the end of 16th – beginning of 17th centuries.

According to canon the cross obverse is devoted to Our Lord Jesus Christ. Crucifix is most often given on next-to-skin crosses. The image of the Lord’s redeeming sacrifice reminds us of the Savior’s blood being shed for our sins. And we re-crucify Him with every new of our sins.

Cross is an implement of execution of Christ, but at the same time it is a symbol of His victory over death. Having met His death as a human being, the Lord descended to hell where there languished souls of all the deceased. As God He was able to destroy the gates of hell, to chain Satan, and to release the righteous souls. Having risen in a human body He granted the mankind a hope for resurrection and futurity. Therefore the Cross of the Lord is worshipped by Church as a clear image of God’s love to everyone, and as a salvation symbol.

On the cross reverse we see a son of Ivan the Terrible, the innocent murder victim Tsarevich Demetrius, Martyr. He was the son of Tsar Ivan and his last – seventh – wife Maria Nagaya. The boy was notable for his sweet temper and credulous heart. According to Church tradition that was contested by several historians in 19th century, the Tsarevich was killed by the order of Boris Godunov. Demetrius was the last of Rurikids (Rurikid Dynasty), and stood in the way of power-seeking Godunov to the throne.

On May 28 мая (May 15 in the old style), 1591 two assassins stabbed the Tsarevich into the throat. The homicide was witnessed by his mother, wet-nurse and the bell-ringer who rang the tocsin instantly. A crowd of people gathered round from the whole town, and literally tore the malefactor to pieces. But before death the assassins named the real perpetrator – Boris Godunov.

The subsequent official investigation was led by Vasily Shuiski under oversight of Godunov himself. Shuiski reported that the Tsarevich had died from a self-inflicted stab wound to the throat, “wild” inhabitants of Uglich killing “his guiltless servants”. Later Shuiski renounced his words and proclaimed Godunov to be the murderer. All-powerful Godunov dealt shortly and cruelly with “rebellious” Uglich: hundreds were executed, multitude being exiled to Siberia; so Uglich itself gradually relapsed into the surrounding wilderness. Maria Nagaya was forced to take the veil and exiled to a remote convent. Even the bell clapper was torn out.

In 1604 an impostor appeared in Poland who assume the name of the miraculously saved Tsarevich Demetrius. Disorders began in Russia. In 1605 Tsar Boris died, and a new one, Vasily Shuiski, ordered the Tsarevich remains to be exhumed and shown to people.

But all of a sudden a menacing sign of God was brought before the onlookers in the opened coffin: after 15 years under ground the body of the Tsarevich Demetrius remained undecayed and smelled sweet. Blood flamed on the shirt of the boy in as if in token of a mournful reproach. Mass miraculous healings occurred beside the grave of the Martyr, particularly among children. Shocked people comprehended: not simply a homicide was committed in Uglich, but sacrilege.

Since then the innocent murder victim Tsarevich Demetrius is venerated as one of the most favorite Russian saints, patron and protector of children. In the calendar of the Russian Orthodox Church he is venerated as a ""Saint Pious Tsarevitch"", with feast days of 19 October, 15 May and 3 June. The Russian Orthodox Church even instituted an order after his name “For Deeds of Mercy” that is the award by Patriarch of Moscow and All Russia. The order is given for crowning achievement in charity, saving and protecting children to individuals and organizations. The observance of the Tsarevich commemoration in ancient Uglich is held with peculiar solemnity. With an icon-bearing procession the coffin of St. Demetrius is carried out, whereto the pilgrims take their children.

Above the icon of the Tsarevich Demetrius on the cross there is Guardian Angel. Everyone has a Guardian Angel of his own; who is God given to him in getting baptized, and invisibly presents beside. The ministry of Guardian Angel consists not only in protecting one, but also in assisting in saving one’s soul for futurity. Therefore Guardian Angels catechize the man spiritually, disciple him in piousness, protect him against evil forces, and invoke God's mercy on him."